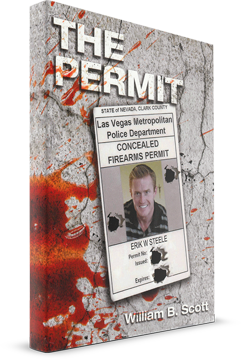 A novel based on the actual events of Erik B. Scott's murder on July 10, 2010, in Las Vegas, NV. When Las Vegas police officers unwittingly gun down a West Point graduate and current covert operations agent, then try to cover up their crime, they unleash the fury of Checkmate, a highly classified "black world" agency. It's an asymmetric war corrupt cops and their allies cannot win — and if Checkmate fails, America will erupt in armed revolt. 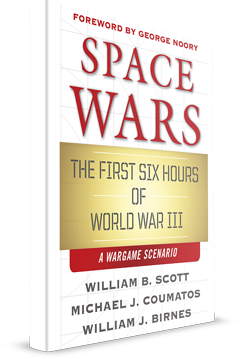 Inside U.S. Strategic Command, top military commanders, space-company executives, and U.S. intelligence experts are conducting a DEADSATS II wargame, exploring how the loss of critical satellites could lead to nuclear war. The players don't know that the war they are gaming has already begun, miles above them in the lifeless, silent cold of space. Jam-packed with the actual systems and secret technologies the United States has or will soon field to protect its space assets, Space Wars describes a near-future nuclear nightmare that terrorists will relish but politicians prefer to ignore. In a quieter, more peaceful time, Space Wars would be an exciting work of fiction. But with the United States now at war, Space Wars is all too real. 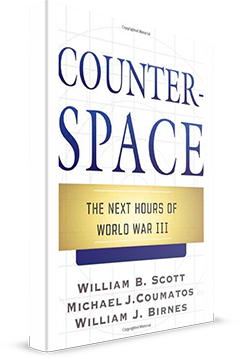 When North Korea detonates a nuclear weapon at the edge of space, silencing dozens of satellites, rogue nations seize a unique opportunity to strike. Overnight, national leaders robbed of spy satellite imagery are making decisions in the blind. An Iranian missile threatens to destroy Israel; a Venezuelan “research” satellite jeopardizes the lives of three astronauts, and tech-savvy terrorist cells unleash back-to-back horrors in California. The White House turns to U.S. Strategic Command and its team of Deadsat II wargamers, racing the clock to stave off international disaster. But power-hungry officials are undermining those attempts. With a B-2 bomber minutes from obliterating a Chinese laser-weapon site, and two U.S. aircraft carriers in China’s missile crosshairs, two great nations stand at the brink of nuclear war.

Warfighting has moved well beyond the realms of land, sea and air, and is now being waged daily in cyberspace. Over the past few decades, military units engaged primarily in computer network defense (CND) have focused on keeping low-level hackers and nation-state bad actors from penetrating critical U.S. systems. Cyber-warriors now cautiously launch limited computer network attacks (CNA), because leaders are concerned about the unintended consequences of offensive cyber operations. For example, what if a cyber attack on a sophisticated hacker cell in North Korea went astray and seriously disrupted or destroyed an ally’s banking system?

Today, U.S. cyberwar methods and capabilities are highly classified, but one can extrapolate from what is known and make some educated guesses. We know that cyber attacks on Iran’s nuclear facilities seriously damaged dozens of centrifuges. Sources imply—but never confirm—that adversaries’ electrical power grids and oil or natural gas pipelines have been disrupted by “cyber” means. Undoubtedly, other cyberwar engagements have been undertaken with results known only to those holding high-level clearances.

If we look farther into the future, what breakthrough technologies might be used to wage cyberwar? As an old fiction-writer, I ask: What if a number of notional weapon systems evolve from high giggle-factor ideas to real-world capabilities? Could the targets of “cyberwar” gravitate from silicon chips and software to synapses, dendrites and other biological systems? These might include:

• Tailored electromagnetic and electrostatic signals or waveforms that disrupt the electrical activity of a human heart. These would enable remotely triggering heart attacks and strokes to literally decapitate the leadership of rogue nations and terrorist cartels. Such a capability was demonstrated in a university laboratory more than 10 years ago.

• Nano-scale “Smart Dust” devices programmed to operate cooperatively. What if super-small “Hunter-Bot” and “Killer-Bot” swarms were scattered from a drone or aircraft, programmed to search for the DNA of a suicide bomber in a specific community? Once Hunters located the bomber’s family via DNA match, “Killer-Bots” would be cleared in hot. If family members were to inhale these invisible ‘bots, the bio-cyber weapons might alter the behavior of a bomber’s wife, children, siblings or parents. Their subsequent shocking actions—considered outrageous and abhorrent to a particular culture— would bring great shame on the suicide bomber’s memory. Or a wannabe suicide bomber might be ‘bot-programmed to leave his explosive vest in the attic and just keep driving the cab, when his handlers give the “GO” order. Thus, Smart Dust could be a powerful cyber tool for deterring terrorist strikes.

• Perhaps the ultimate cyber attack would be inserting false images in a target’s brain. Imagine a battlefield general officer, who thinks he sees an object with his eyes, but the object isn’t really there. It only exists as an image in his brain, an image created by tailored signals that bypass the optic train and are registered directly into a section of the brain processing information transmitted from the eyes.

The target could no longer tell the difference between what’s actually occurring in the real world and what his brain registers as a false image. Instead of two F-35 fighters and a pair of M1A2 tanks attacking his dug-in force, a targeted combat leader might believe he’s seeing hundreds of fighters and armored vehicles attacking. The panicked general thinks he’s facing an overwhelming force and orders a rapid retreat. His troops only see two jets and two tanks, and wonder whether their general is hallucinating or going crazy. That cyber-targeted battlefield commander would quickly lose the confidence of subordinates and cease to be an effective leader.

Such notional cyber weapons might be mere fantasy today, but clearly would be invaluable for creating fear and doubt among enemy forces. Until they manifest as real-world weapons, these concepts might still serve as deterrents, even if they only “manifest” in fictional books, TV shows and movies.

Sounds wild, but history is filled with examples demonstrating the power of fiction and entertainment to shape perceptions that, in turn, affect behavior. Proactively employed as one element of a combined psychological and cyber warfare campaign, fictional stories and movies can sow distrust and fear within an adversary’s forces.

What if some of these notional cyber and psyop weapons and tactics are already fielded? If they are, who is controlling them? And who are the unsuspecting targets?