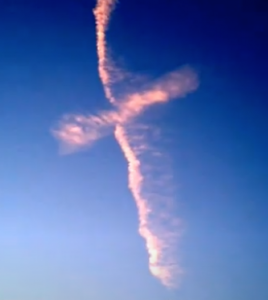 Around 3:00 a.m. on July 10, 2020, I received a priceless blessing from the other side. It came in the form of a profound, vivid dream that’s now burned into memory. It often plays as a mental movie, recalled at will.

The Dream:  My wife, Linda, and I were standing on the sideline of a grass field, watching a group of people engaged in who-knows-what. Maybe a kids soccer game. The field was surrounded by towering trees, perhaps Ponderosa pines or firs. Definitely conifers.

Per my norm, I looked up and scanned the sky. Scattered, puffy clouds drifted from right to left across a sapphire background.

“Hey, check that cross,” I said, pointing. A wispy cloud had formed into a Christian-type cross—short horizontal bar spanning a longer vertical shaft.

“Where?” my bride of 50 years asked. I tried to direct her attention to the faint cloud, but it was rapidly dissipating. Within seconds, it had broken into feathery tufts.

“Darn! I never saw it! Probably just criss-crossing contrails,” Lin dismissed, chiding me for not pointing it out sooner.

We turned our attention back to whatever was happening on the field. Remember, it’s a dream. Sometime later, I again eyeballed the sky. And there was another cross, maybe 60 deg. up and slightly to my left, about 11 o’clock from where we stood on the field’s sideline.

“It’s back, Princess!” This time, I stood right behind Lin, extending my right arm past her ear, pointing out the sky-cross.

“It is a cross! And it’s getting thicker!” she exclaimed. At cloud-speed, the cross gradually became more well-defined, as it drifted to our left. Then it broke ranks with neighboring clouds and began descending, arcing slowly around us. As it dipped below the tree tops, Lin marveled, “It’s going behind the trees!”

“No, it’s in the trees! Tree tops are behind and in front of it!” I corrected, evoking the look. Remarkably, the cloud-cross had dipped below the trees’ crowns, as it passed our 9 o’clock, directly to our left. It maintained a steady, arcing flight path, as if circling around behind us.

Stunned, we turned and stared at the well-structured white cross emerging from the tree line—now a mere 70-100 feet above the ground—and floating toward us.

“How is that possible?” Lin whispered. In awe, we gaped at the white specter wafting in our direction. It halted at what had been our 6 o’clock, suspended in the cobalt-blue sky.

The Sun was now at our back, closing on sunset. Its soft rays illuminated the cross in brilliant white-gold. A truly spectacular, unbelievable display, even for a dream.

But this miracle wasn’t finished. The radiant cloud-cross drifted closer, descending serenely. I instinctively reached up and gently grasped the base of the cross with my left hand. Not cloud-like at all, the surface was smooth and satiny. It also felt soft, as if filled with a pliable substance. Not gel or foam, but something along that line.

For a few seconds, I held onto its base, as the cross hovered before us, weightless. Lin and I were starstruck, gazing in wonder at the glowing symbol of eternal, unconditional love.

Then I woke up. In predawn darkness, I replayed the incredible dream, ensuring those vivid, miraculous images were seared into memory.

Religious professionals, mediums and spiritualists could offer myriad interpretations, but I have no idea how to decode the dream’s symbolism. However, I know it was a message from the Other Side, a message of comfort and assurance that Erik, our eldest son, was in good hands.