A series of terrifying events is triggered when several satellites orbiting the Earth simply die. The United States finds itself in a national security dilemma, as both commercial and military satellites mysteriously go silent.

“If you think Iran’s a nuclear nightmare now, look at what we could face in another decade. Space Wars is as pulse-pounding and blood-chilling as any thriller I’ve read. These guys really know their stuff.”
— Douglas Preston, New York Times bestselling author of Tyrannosaur Canyon

“I thought I knew something about military capability, but Space Wars made me feel naïve. These guys know everything about our military technologies and Iran’s nuclear capabilities, from inside out. Move over Tom Clancy and Michael Crichton, these guys are the real deal.”
— David Hagberg, USA Today bestselling author of Soldier of God

“The hair on your neck will rise as you absorb the latent danger facing the United States as revealed by Space Wars. The utterly believable, totally logical premise is terrifying, and the book should be made required reading for Congress. As Space Wars makes clear, we are on the edge of a low-tech catastrophe that will wipe out our high-tech advantages.”
— Walter Boyne, former director of the National Air and Space Museum of the Smithsonian Institution and a New York Times bestselling author

“Unless we are willing to accept the fact that there are some out there who are fanatically bent on destroying us, Space Wars could be profoundly prophetic.”
— Navy Capt. (Ret.) Gene Cernan; Apollo 17 Commander

“Space Wars is a realistic, often startling behind-the-scenes account of military space strategies and mounting geopolitical threats in our world today. It will leave you gazing toward space with a new understanding of the great battlefield just beyond our atmosphere and the critical role it plays in the future of mankind.”
— Lt. Governor Jane E. Norton, State of Colorado

“This is the best book I have read all year. It is a wake up call for western society, offering a compelling story of how high technology in criminal hands could be used to attack and damage our way of life. Space Wars should be mandatory reading for politicians, policy makers, businessmen, lawyers, and students.”
— Maj. Gen. (ret.) Wilbert D. Pearson
Former commander, U.S. Air Force Flight Test Center; Current Vice President, F-35 Integrated Test Force, Lockheed Martin

Retired as the Rocky Mountain Bureau Chief for Aviation Week & Space Technology, after a 22-year career with the aerospace magazine. Former U.S. Air Force officer; Flight Test Engineer graduate of the USAF Test Pilot School; civilian pilot—Commercial certificate with Instrument and Multiengine ratings; logged ~2,000 hours of flight time in 80 different types of aircraft; Bachelor of Science in Electrical Engineering; married to Linda, father of two wonderful sons, Erik and Kevin. Author of "The Permit"; contributor to "License to Kill: The Murder of Erik Scott"; coauthor of "Space Wars: The First Six Hours of World War III," a sequel, "Counterspace: The Next Hours of World War III", and "Inside the Stealth Bomber: The B-2 Story".
View all posts by Bill Scott →
Counterspace
The Permit 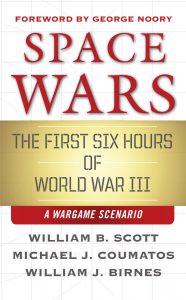