When Las Vegas police officers unwittingly gun down a West Point graduate and current covert operations agent, then try to cover up their crime, they unleash the fury of Checkmate, a highly classified “black world” agency. Using advanced high-tech weapons, Checkmate sends a loud-and-clear, deadly message to outlaw killer-cops: “You kill, you lie, you die.”

Early Reviews of The Permit:

The murder-by-cop of Las Vegas resident Erik Scott in the summer of 2010 was the catalyst for this novel by his father, William B. Scott. It’s a stark revenge fantasy, but more than that, it’s an indictment of the Las Vegas crooked cops, crooked sheriffs, crooked DAs and the Las Vegas moguls, who use them to protect the glittering image of Sin City… and to line everyone’s pockets. Without doubt, Las Vegas is the most corrupt city in America, right up there with Detroit and Chicago. My hat is off to Bill Scott for having the courage to write this… and the guts to go to Sin City to promote it. Everyone in Vegas isn’t buying police lies.

Still, THE PERMIT is a thriller, chock full of high tech weapons and flying that only someone who has lived it, like Bill Scott, could write. Read it as a thriller and enjoy it. Afterwards, think about police corruption and the corrupt political and union elites who facilitate and profit from it. It’s a cancer eating at our free society. We need honest cops, not juiced SWAT teams with licenses to kill.

After all, YOU could be next.

When What Happened in Vegas Shouldn’t Have Happened at All

Scott’s book is riveting, a real page-turning, sock-you-in-the-gut story that leaves you reeling with the recognition that Las Vegas isn’t just seedy and scary and smutty and over-run with lowlife. It’s the kind of quintessentially corrupted place that can’t, just can’t, be in these United States of America. It must be Mexico. Or Moscow.

Right? Wrong. Read it and rant about “law enforcement” run amok. Read it and weep about a family’s horror story in the wake of a bizarre mid-day murder that occurs outside a crowded store in front of scores of eye witnesses, and yet goes essentially uninvestigated. Read it and ask: Whatever happened to justice?

Scott may be the angry, grieving father, but he’s also one heck of a writer.  — Boxcar

By Russ Kimball (TEMPE, AZ, US)

This is an absolutely amazing story; all too real. It was a most unique way for a father to vent his grief and call attention to a very dangerous and potentially deadly change in American law enforcement across the U.S. As a former LEO, I have no doubt many of the policies and practices Mr. Scott described are true. I’ve seen them myself, since leaving street law enforcement. I also think this wonderful, dedicated father is exceptionally talented in a variety of fields he “reveals” in this book.

Retired as the Rocky Mountain Bureau Chief for Aviation Week & Space Technology, after a 22-year career with the aerospace magazine. Former U.S. Air Force officer; Flight Test Engineer graduate of the USAF Test Pilot School; civilian pilot—Commercial certificate with Instrument and Multiengine ratings; logged ~2,000 hours of flight time in 81 different types of aircraft; Bachelor of Science in Electrical Engineering; married to Linda, father of two wonderful sons, Erik and Kevin. Author of "The Permit"; contributor to "License to Kill: The Murder of Erik Scott"; coauthor of "Space Wars: The First Six Hours of World War III," a sequel, "Counterspace: The Next Hours of World War III", and "Inside the Stealth Bomber: The B-2 Story".
View all posts by Bill Scott →
Space Wars
Black Aura (in progress) 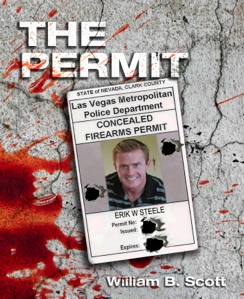