Once again, our cities are being destroyed in riots triggered by a police officer’s senseless, horrific murder of a citizen who posed no threat. And again, the news media and professional agitators have adroitly shifted the focus to “racism”.

Yes, racism may have contributed to officer Derek Chauvin’s stupid decision to keep his knee pressed on George Floyd’s neck for 8 minutes and 46 seconds, even after Floyd’s heart flat-lined. As The Wall Street Journal reported, the victim was “nonresponsive for the final 2 minutes and 53 seconds.”

First and foremost, this incident was raw police brutality, not racism. George Floyd was murdered by Derek Chauvin, aided and abetted by other cops, who either kept their weight on Floyd’s back or stood by and ignored the dying man’s pleas. If not for a smart citizen video-recording the heinous execution, four Minneapolis police officers would not have been fired, and Derek Chauvin would never have been charged with third-degree murder and manslaughter.

Chauvin’s arrest is a good start. But it was slow in coming and smacks of weak politicians desperately trying to quell protests. Of course, obligatory promises of a thorough investigation into Floyd’s death were issued from on high. This time, though, Americans were having none of politicians’ well-worn pacification playbook. Millions were already frustrated and angry, after two months of Covid-dictated lockdowns and job losses. Because government officials had sacrificed what little credibility they still possessed, their pleas for patience fell on deaf ears. The shocking video of George Floyd being choked to death ignited a firestorm that consumed pat political platitudes.

Although I definitely do not condone the senseless destruction now sweeping our nation, I fully understand the anger and frustration fueling it. I, too, have lived the nightmare of naked police brutality and have experienced the exasperation of being thwarted by a corrupted “justice” system.

Eight years ago, I predicted the current violent backlash and riots would happen, if cops continued to kill what they derisively call “civilians.” From my novel, “The Permit”: 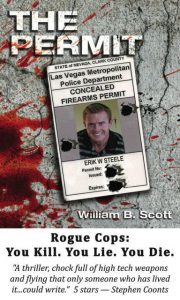 Maybe we’re already there. If not, we’re close. Wild beasts birthed by cops killing, then lying and covering up their crimes, are on the loose and may not be tamed soon.

All thinking Americans condemn the targeting of police officers. But as our nation mourns the senseless death of George Floyd, let’s not forget that cops routinely kill 1,000-1,300 Americans every year— roughly an average of 3.3 people per day, every day of the year—and get away with it 99 percent of the time. Those sworn to protect and serve the citizens who pay cops’ salaries and benefits kill more of us every few years than al Qaeda terrorists murdered on 9/11.

Granted, the majority of police officers are first-rate professionals, dedicated to protecting and serving, and they’ve rightly been hailed as heroes, during the Covid-19 ordeal. But honorable lawmen are now in danger, because they looked the other way, tolerating and protecting ruthless cops, such as Derek Chauvin, in their ranks. All in the name of a Mafia-like code of Blue Silence, an illogical, police union-dictated solidarity that infects every law enforcement agency in the United States.

The blood of any police officers killed or injured by Antifa and other anarchists, while trying to restore order in dozens of besieged cities, will be on the hands and souls of heartless rogues wearing badges. Every police officer who got away with murder under color-of-law bears responsibility for the chaos and destruction now plaguing American cities.

Until cops stop killing “civilians,” every uniformed police officer in America is in danger.

It’s time to stop the hand-wringing and kumbaya calls for “calm” and “standing together,” and tolerating politicians who spew empty promises to DO SOMETHING, even if it’s ridiculously ineffective and unconstitutional. It’s time to implement real solutions, such as:

• True third-party investigations of every officer-involved fatality, based on the National Transportation Safety Board model (see “Law Enforcement is Fifty Years Behind Aviation”).

• A protocol similar to the Aviation Safety and Reporting System, whereby good cops can anonymously report the misdeeds of their colleagues.

• Zero tolerance for preemptively killing citizens “suspected” of being a threat, solely in the name of “officer safety.”

• Firing cops involved in cover-ups of an officer-involved fatality or other serious misdeed, banning them from the law enforcement field and subjecting them to racketeering charges.

• Mandatory annual recertification of every law enforcement agent in the nation, to include psychological re-screening and several hours of education about the Constitution, particularly the Bill of Rights. Officers having multiple use-of-force complaints and/or a shooting on their records would be subject to dismissal in the name of public safety. Loose cannons wearing badges must be purged.

• Launching a federally funded crash program to develop, test and field nonlethal means of subduing “suspects”. The program should focus on electromagnetic and/or electrostatic technologies that accurately deliver a nonlethal, disabling effect at some distance. These are feasible in the near-term. I saw a prototype of such a system in a Huntsville, AL, research lab 15 years ago. If such a nonlethal weapon had been in an officer’s hands on 10 July 2010, instead of a .45-caliber Glock 21 semiautomatic, my son would be alive today. Maybe George Floyd would be, too.

• Repealing “Qualified Immunity” statutes that protect cops from prosecution. Although QI sounds reasonable, these well-intentioned laws have been perverted to the detriment of countless citizens routinely denied justice, when a cop kills. QI is literally a get-out-of-jail-free card foisted on American citizens by unprincipled police unions and naïve politicians who failed to foresee its obscene unintended consequences.

These must be absolute top priorities for politicos to tackle…IF they’re serious about curtailing the senseless killing of both citizens and police officers, and ending today’s rampant riots. God help us, if elected officials and law enforcement leaders decide to hunker down and ride out the current crisis ignited by the murder of George Floyd. Rather than kick the police brutality issue down the road yet again, they must purge police forces of dangerous killer-cops and restore honor to what once was an honorable profession—that of Peace Officer.

“The Permit”, a Checkmate Justice novel

“License to Kill: The Murder of Erik Scott 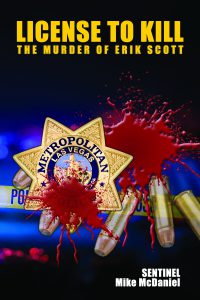