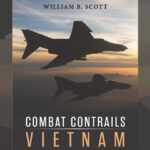 COLORADO SPRINGS, CO (November 2021) – Almost half a century has passed, since American troops were pulled from South Vietnam. Typically, they came home to family, friends and colleagues who had no interest in hearing what those warriors had experienced. Aging Vietnam vets finally are being asked, “What was it really like to fight in that ugly war?” And they’re sharing their … END_OF_DOCUMENT_TOKEN_TO_BE_REPLACED