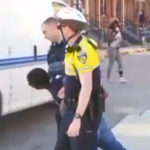 In the wake of Freddie Gray's death, while in Baltimore police custody, City Prosecutor Marilyn Mosby quickly filed charges against six police officers. Now they've been indicted on various charges. Based on inconsistencies reported from the outset, one wonders whether these charges and indictments were merely eyewash to get infuriated Baltimore residents and outside … END_OF_DOCUMENT_TOKEN_TO_BE_REPLACED